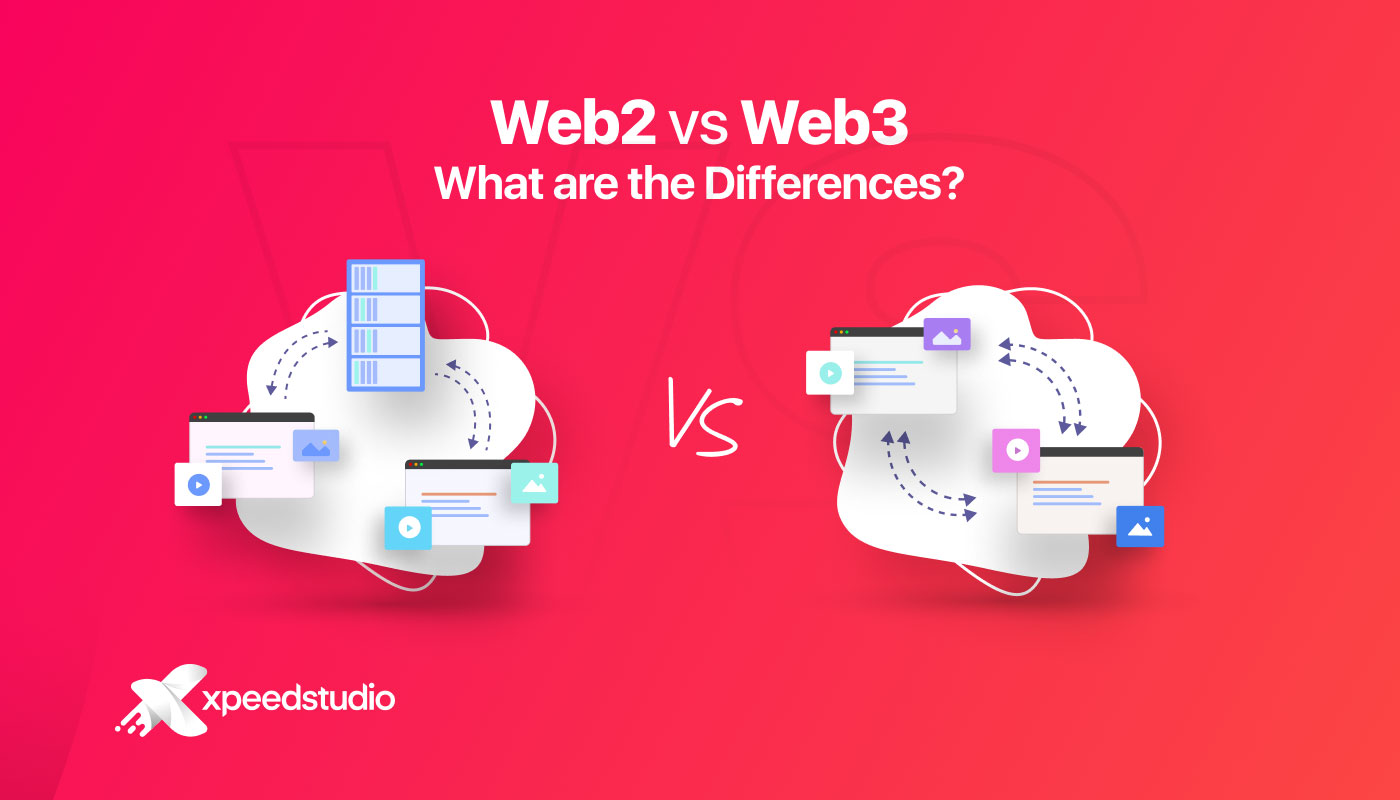 The internet has evolved over the years. From the early days when websites used to be a basic source of information to the modern era with the virtual world on the internet, we have been seeing generational changes in web technology.

There have been three web generations till now: Web1, Web2, and Web3. While there is a daylight difference between the first two generations, the gap narrows down a bit when it comes to Web2 vs Web3.

The major difference is the centralization and decentralization of the web. But what else distinguishes the latest two versions of the internet?

Contents hide
A brief history of web evolution: Web1, Web2, and Web3
Web2 vs Web3: The difference
Web2 vs Web3: What is the advantage of Web3?
Why is Web 2.0 still being used today?
Can Web3 completely replace Web2?
FAQs

A brief history of web evolution: Web1, Web2, and Web3

The evolution of these web technologies can be described in one sentence:

To expand on it, the first generation of the web (Web 1.0) was the basic form of the internet with read-only content on the web.

The second generation, Web 2.0 made the internet interactive, where users can also post content or comments to websites.

Now, with Web3, users have ownership of their content too.

Before getting into the Web2 vs Web3 comparison, let’s gather some basic know-how about the three generations of the web.

Static, read-only websites where users can only consume content without any interactive action.

Web 1.0 is the first stage of internet evolution. Starting from the early 1990s, this era was when only a few knew how to manage and create content on websites. Therefore, “read-only” websites like encyclopedias were designed to provide information and visitors come across the website to consume the content only.

Fundamentally, Web1.0 was a Content Delivery Network (CDN), where most of the web pages were static and they used to contain “text-only” content as the form of information that lacks visuals and controls. Content and data in Web 1.0 were delivered from the server’s filesystem.

Since the introduction of Web 2.0 (in 2005-06), the internet has been revolutionized. Data collection, generation, and distribution become so easy that the trend of creating websites and web applications got an immense boost.

Web 2.0 development includes web technologies like JavaScript, HTML5, CSS3, AJAX, and more, that help to make the internet much more interactive for users.

Most significantly, Web 2.0 has introduced user-generated content to the internet. Now, users have the capability to create and publish content on web pages and “read-only” websites from the Web1.0 era gained read-and-write compatibility.

Moreover, Web 2.0 enables advertisements on the web. When the user browses the internet, the website stores the user’s browsing data. Those data are used to show user-specified ads to the user on the internet.

In a nutshell, Web 2.0 is the present form of the internet we see today.

Technologies in Web3 are almost identical to Web 2.0, except for one major difference. Instead of centralized databases and servers, Web3 is built using decentralized blockchains.

Web3 is a decentralized, permissionless, self-governing distributed system where the decentralized applications, aka dapps, run on blockchain networks consisting of numerous peer-to-peer connections among a community of users.

In a decentralized web system, data is distributed across different devices connected in a peer-to-peer network. This way, no individual owns the entire data, but everyone in the network has their fair share of access to it.

Basically, by decentralizing the web system, Web3 hands back the ownership of the content to its creator.

Also Read: How Much Does it Cost to Create an NFT: Explained

Web2 vs Web3: The difference

Most of the capabilities of Web3 are already present in Web 2.0. So what’s the point of introducing new technology? The following Web2 vs Web3 comparison highlights the distinction between the two generations of the web.

Here is a glimpse of the major differences between Web2 and Web3.

Web2 vs Web3: What is the advantage of Web3?

✅ Content creators and end-users have ownership.
✅ Can’t be controlled by third-party services.
✅ No tracking of personal data.
✅ Self-governing web network.
✅ Fewer chances of the system going down.

As said earlier, Web3 is a decentralized system where data is distributed on different devices in different locations. This creates a huge difference between Web2 and Web3 technology. In Web 2.0, data and web assets are kept in a centralized server. Therefore the content is basically owned by companies that have large-scale databases set up.

For example, services like AWS and Google Cloud actually have greater control over the internet and they can take down any content that doesn’t fit into their company policy.

This isn’t the case with Web3. In a distributed system, no single person or company has complete control over the data and content. Instead, each end-user participates in the process and has his/her fair share of the system.

Furthermore, technologies like blockchain, NFTs and cryptocurrency facilitate Web3 principles. Blockchain is basically the decentralized system that Web3 is built on. While NFTs are used to ensure ownership of digital assets.

Most importantly, the decentralized Web3 security is far more sheltered than the centralized network. A breach in the centralized server can risk the entire data of that network. On the other hand, in a decentralized system, even if one node is compromised, others won’t be affected much as the network is built on the peer-to-peer connection of devices in different locations.

Moreover, Web3 can leverage the potential of next-generation technologies like IoT, Augmented Reality (AR), and Virtual Reality (VR) can evolve Web3 further ahead. Virtual reality games and simulations like Metaverse can achieve new heights in the Web3 era.

Why is Web 2.0 still being used today?

Despite the advent of Web3, the mainstream internet is still reliant on Web2 — mainly due to the accessibility of Web2 in a wide range. Most web browsers are compatible with HTML5 and CSS3, and also they support frameworks of JavaScript and AJAX. That makes Web2 easy to integrate with web browsers.

Besides, web applications are easy to develop in Web2 as most of the software developers are skilled in Web 2.0-based application development. That makes it easy to find a developer to create a second-generation web application. Whereas there are few who develop dapps (decentralized apps). So it’s difficult to find a skilled developer for Web3 applications and it is costly too.

Moreover, the threat of unlawful use of the internet is a reason too. In Web3, authorities cannot regulate harmful and vulgar content. So this content can get available on the internet and it can negatively impact society. Similarly, criminals can take advantage of the anonymity of their identity on the internet.

In terms of currencies, crypto is quite a fragile one. Cryptocurrency is not monitored and a crush can be devastating for the users. Therefore, governments around the world aren’t willing to implement the system at the state level.

Both Web3 and Web2 will coexist for the time being.

The invention of new technology doesn’t always replace existing technology. From the discussion above, we can see both have their edges and drawbacks.

The current form of the internet may change in the coming year with the use of IoT and virtual reality and this will evolve the Web3. However, Web2 will also maintain its relevance for obvious reasons.

Moreover, the newest model of the internet – Web4 will also impact the relevancy of the previous generations.

They are fundamentally different. Web3 is a blockchain-based web system. While Web 3.0 is a semantic web that is an extension of the existing World Wide Web (www).

Why is Web 3.0 not fully implemented?